In September, Svenska Aerogel introduced their new product SeaQare™, an innovative technology that can be used in antifouling paint to reduce copper release from leisure boats into our seas. At that time, the company also presented independent testing of SeaQare™ from 2021 which had extraordinary results. Now results have come in from another test, carried out in 2022. The new independent testing also presents very good results, which confirms the positive effect of SeaQare™.

Between June – October 2022, SeaQare’s™ effect has been tested once more by Research Institutes of Sweden (RISE). This year’s testing was conducted during the same season as last year’s testing. The aim of the new, static sea test was to repeat the extraordinary result from 2021 with a scaled-up production volume.

Before the test started, antifouling paint containing SeaQare™ was applied on several PMMA panels. The formulation used in the test, which is the best suited for this type of paints, is rosin-based and contains only 1.35 % Cu (OH)2. The panels were then attached to an aluminum frame which was placed at the Kristineberg Center on the Swedish west coast. Throughout the test period, inspections were made to measure and document fouling, and the panels have been photographed regularly by RISE’s experts. These experts have evaluated the panels using industrial standard CEPE20, where SeaQare’s™ efficacy has been evaluated based on five different families of fouling organisms on a scale of 0 – 5.

On October 27, the panels were finally taken out of the water. The test period ended with very good results, and it was clear that the panels were well approved, just like last year.

Emiliano Pinori, researcher and expert in marine fouling and surface protection in marine environments at RISE, has been involved in the execution as well as the analysis of the tests in 2021 and 2022. He comments on SeaQare’s™ high efficacy:

– The results showed that antifouling paint containing Svenska Aerogel’s SeaQare™ provides a very high efficacy against fouling, both in 2021 and 2022. Antifouling paint with SeaQare™ has previously also shown a record low release rate of copper and performed as well as commercial copper paint for the Swedish west coast. 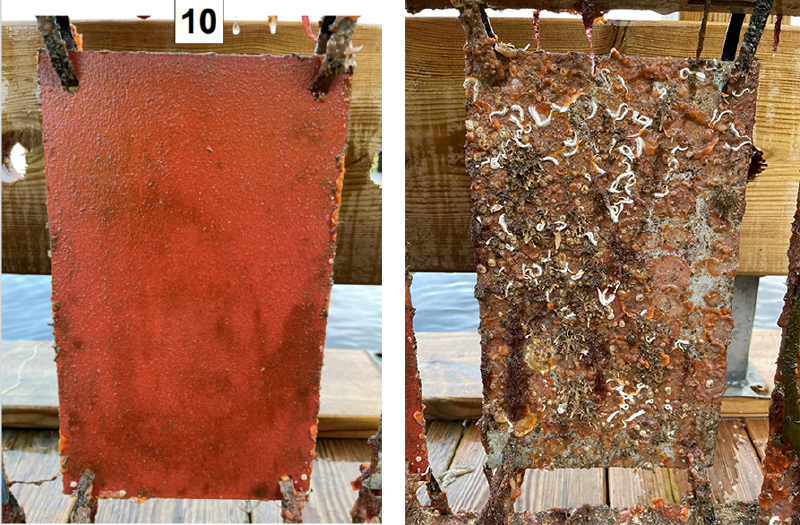 Both pictures were taken after four months of exposure in the sea on the west coast. The picture on the left shows a panel painted with paint containing SeaQare™. The picture on the right serves as a reference and shows fouling on an unpainted panel.

Since Svenska Aerogel introduced SeaQare™ in September, there has been great interest in the product. Several customer samples will be sent to paint manufacturers in Europe and the USA during the month of November.

SeaQare™ is based on amorphous, porous silica (Quartzene®) which is hydrophilic. SeaQare™ acts as a carrier of copper in antifouling paints for leisure boats and contributes to a controlled release of copper that protect boat hulls from fouling. With the help of SeaQare™, copper can be used more efficiently than in traditional antifouling paints, and unnecessary copper release into our seas can be avoided.

Svenska Aerogel manufactures and commercializes the nanoporous material Quartzene®. Svenska Aerogel’s business concept is to meet the market’s need for new materials that are in line with global sustainability objectives. Quartzene® is flexible and can be tailored to different applications to add essential properties to an end product. The company’s vision is to be the most valued business partner providing pioneering material solutions for a sustainable world.