This month Svenska Aerogel participated in the International Antifouling Conference, organized by I-Tech and RISE in Gothenburg. At the conference, Pernilla Ståhle, Head of R&D at Svenska Aerogel, presented the company’s new product SeaQare™ – a sustainable technology that can be used in antifouling paints to reduce copper toxicity in our seas. Independent product testing has presented extraordinary results.

The new product SeaQare™ is based on amorphous, porous silica (Quartzene®) which is hydrophilic and contains copper. SeaQare™ acts as a carrier of copper in antifouling paints, contributing to a controlled release of copper into the water. With the help of SeaQare™, copper can be used more efficiently than in traditional antifouling paints, and unnecessary copper toxicity in our oceans can be avoided.

SeaQare™ was recently presented by Svenska Aerogel at the International Antifouling Conference where research, technology and the market were combined for two days. Svenska Aerogel’s Head of R&D Pernilla Ståhle comments:

– The new product was well received; several important market players showed great interest in the lowest release rate they had ever seen. This means that SeaQare™ does not release more copper into the sea than is necessary to obtain the desired protection against fouling.

SeaQare’s™ efficacy was tested by Research Institutes of Sweden (RISE) between June 2021 and October 2021. During the test, an antifouling paint containing SeaQare™ was also compared to commercial anti fouling paints on the market. The different antifouling paints were applied to PMMA panels. The panels were then randomly attached to an aluminium frame which was placed at the Kristineberg Center on the Swedish west coast. The first inspection of the panels was made after two months and the second was made after four months, at the end of the test. Fouling was documented at both inspections. 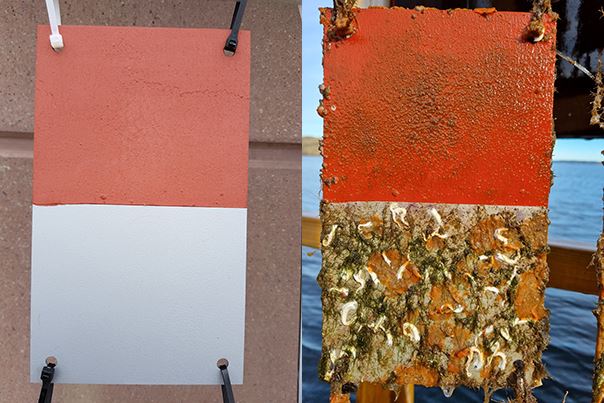 The picture on the left shows a panel whose upper half is painted with SeaQare™ paint. The lower half is unpainted and serves as a reference. This picture was taken at the start of the test. The picture to the right shows the same panel at the end of the test.

The results showed that the paint containing SeaQare™ released significantly less and more even copper levels than the other paints. The competing paints caused a large release of copper (a burst-out) at the beginning of the test, which later decreased to a steady state level. SeaQare™ showed an initial release that was one-tenth as large as the normal release of antifouling paints after a week of testing. 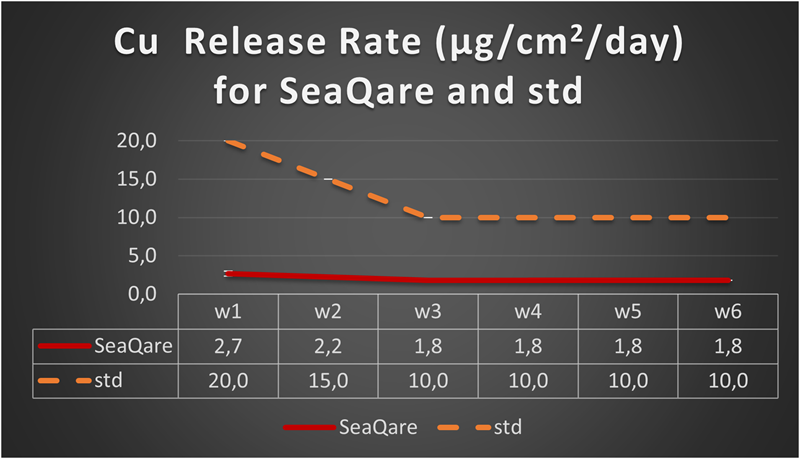 The graph shows SeaQare’s™ copper release week by week over the course of the test and compares this to how it usually looks for antifouling paints (std).

The sea test is currently being repeated on the Swedish west coast. In addition, continued testing with SeaQare™ will be conducted in North American waters in 2023. Product samples will be available for distribution to customers in November 2022.

Antifouling paints are used to protect boat hulls from the growth of barnacles, algae, and mussels. Such organisms can increase boats’ resistance in the water and thus also their fuel consumption and exhaust emissions. Copper is the most common active substance in antifouling paints and is very effective in preventing fouling, but when used excessively, the substance can have a toxic effect on our nature. According to RISE, almost 30% of Swedish leisure boats in the Baltic Sea use an unnecessary amount of copper considering the relatively mild fouling pressure in the sea.

Due to these problems, the use of antifouling paints within the EU is regulated by the Biocidal Products Regulation (BPR, Regulation (EU) 528/2012). The regulation is based on two requirements: an efficacy requirement and an environmental risk requirement. Pernilla Ståhle explains how SeaQare™ matches both demands:

– With SeaQare™, we have shown that we can provide high efficacy while having a minimal amount of copper in the paint. This is done by incorporating copper into the Quartzene’s® structure, which consists of nano-sized pores with an enormous internal surface area.

Svenska Aerogel manufactures and commercializes the nanoporous material Quartzene® for various industrial applications. Svenska Aerogel's business concept is to meet market needs for new materials focusing on sustainability. Quartzene® is optimized to add desired properties in various applications. The company's vision is to be the most valued business partner providing new material solutions for a sustainable world.